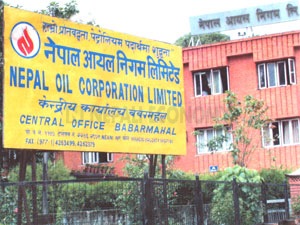 Despite huge loss Nepal Oil Corporation is paying petroleum dealers hefty sum to maintain their office and fleecing consumers.
Except its commission, a dealer gets Rs 1.34 per litre of petrol, Re 0.87 per litre diesel, Re 0.84 per litre of kerosene, Rs 52.54 per cylinder of cooking gas as shrinkage, working loss and to maintain its office, the data at the state oil monopoly revealed.
Petroleum dealers have been making huge money but the NOC is technically-bankrupt due to hefty commission and extra expenses, it is paying to the dealers fleecing the consumers, said an official at the NOC.
A dealer gets Rs 3.29 per litre petrol, Rs 2.25 per litre diesel, Rs 2.59 per litre kerosene and Rs 62.55 per cylinder of cooking gas as commission, which is already huge, he said, adding that a consumer is paying every penny for the commission and extra expenses too.
The monthly loss has once again surged to Rs 1.22 billion after it rolled back the price of petrol by Rs 5.50 per litre and diesel and kerosene by Rs 3.50 per litre due to protest. However, the loss making NOC can not sustain the increasing loss for long and the long queue will again start in every petrol pump sooner, he added. "The loss of NOC had reduced to Rs 910 million, had the prices not been rolled back, NOC spokesperson Mukund Ghimire said.
The NOC had raised the price of petrol by Rs 10 per litre and diesel and kerosene by Rs 6 per litre last Friday but the decision had to be taken back after pressure.
Earlier, before increasing the price, the NOC was making a loss of Rs 1.69 billion per month.
Cooking gas is the highest loss making product, according to him. NOC is making a loss of Rs 864.92 on per cylinder cooking gas, which is damaging the financial healt of the state-oil monopoly.
To minimise losses, earlier government had decided to remove subsidy in cooking gas for commercial purpose and planned to implement red cylinder for domestic use – with limited subsidy – and blue cylinder for commercial use in market price. But that decision could not be implemented, also due to nexus between dealers, corrupt NOC officials and lack of effective market monitering mechanism.
The sole supplier of the petroleum products Indian Oil Corporation sends NOC price list every fortnight and the only mechanism that could help suatain the NOC is to have automatic pricing mechanism, meaning increase the price, when it is expensive and decrease when the prices in the international market drops. However, the NOC, dealers, government, they have all been hands in glove in case of reforms in the petroleum business but are happy in fleecing the consumers.
Regular price adjustment in transparent manner will boost the confidence of consumer too but the NOC itself is not willing to be transparent due to red tape and some corrupt officials. "Apart from the red tape within the institution, there is a nexus of dealers, NOC staffers and politicos," another official at the NOC said without wanting to be named. "The NOC has been providing free petrol to politicos and their cadres, which is yet another cause of loss, but the consumers cannot get petrol, even if they are willing to pay," he added.
The consecutive governments have formed commission claiming to reform the petroleum business and the latest one was led by the then lawmaker Bhim Acharya, who is currently a tourism minister.
The commission had also suggested to revise commission and expenses for the dealers.